Does Your Business Have a Disaster Recovery Plan? 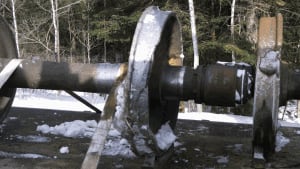 This cracked wheel slipped on its axle on the train that derailed near Plaster Rock, N.B., on January 8th, 2014. (CBC)

Crude oil spills are bigger from trains than pipelines

The flaming wreckage of a derailed train carrying crude in northern New Brunswick once again calls into question the safest way to transport crude oil across Canada.

A Global News analysis found that train spills in transit are larger than those from pipelines. And trucks, though they have a higher rate of accidents, tend to spill much less.

Although the train accidents tend to be large, they are less frequent than those from trucks or pipelines, according to Global News’ calculations.

The two recent train explosions were also quite unique in recent Canadian history. According to the data, Lac Megantic was the first explosion of train cars carrying crude oil since 2006.

Between January 1, 2006 and June 30, 2013, almost one third of all dangerous goods accidents on rail or road involved crude oil – much more than any other substance. But most of the 1,556 accidents in this time period happened while the vehicle was being loaded or unloaded; 645, or 41 per cent, happened in transit.

“The preference is pipelines,” said Graham White, spokesperson for Enbridge, the company behind the Northern Gateway project – a pipeline that would take crude from Alberta to Kitimat, BC and got a federal review panel’s stamp of approval late last year.

Because pipelines are underground, White said, they’re not subject to traffic and weather conditions, the volume is easily controlled and the flow is continuous.

They’re also cheaper: $5 to $9 per barrel of oil through a pipeline, compared to $10 to $20 per barrel by train, he said. Jessica Wilkinson, spokesperson for oilsands producer Cenovus, gave similar figures: $7 to $10 per barrel by pipeline versus $15 to $18 by train.

Oil companies’ preference may be pipelines, but the volume of oil shipped by train has grown exponentially over the past few years, according to Transport Canada: 4.3 million metric tonnes of crude oil and bitumen were transported in 2012, up from 375,000 the year before.

CN Rail says it moved approximately 30,000 carloads of crude oil in 2012, and double that in 2013; the company aims to double the number of carloads again over the next two years.

But it may have to prove its cargo’s safety first.

“We don’t have a lot of information, we are assessing as we speak,” he said, adding that the environmental impact “hopefully will be manageable.” But the fire’s a priority for now.

“We have the equipment, we have the people and we have all the procedures in place to deal with it in a safe manner.”

“Railways complement the existing pipeline infrastructure and they are just as safe and as environmentally sustainable as pipelines in moving energy to market,” CN spokesperson Mark Hallman wrote in an email.

“Roughly 99.998 per cent of hazardous material carloads moving by rail arrive at their destination without a release caused by an accident.”

But the average train spill in transit is far larger than the average in-transit pipeline spill.

← When Natural Disasters like the Toronto Ice Storm Hit
Impacted by the Shut Down of Symantec Backup Exec.cloud? →